On 24 June 2017 Jeff Lynne’s ELO performed a concert to 60,000 people at Wembley Stadium, following their acclaimed appearance at Glastonbury Festival in 2016. The show saw the band play a 24 song set list, including classic hits such as “Mr. Blue Sky”, “Twilight”, “Evil Woman” and “Livin’ Thing”, together with their most recent hit single “When I Was A Boy” (from Alone In The Universe).

Rarer tracks performed included “Do Ya’”, originally recorded by The Move, the Traveling Wilburys hit song “Handle With Care”, and “Xanadu” from the movie soundtrack of the same name, that originally featured Olivia Newton-John.

The stage set featured a giant spaceship and incredible lighting, with Lynne backed by a hot band of musicians, replete with a small string section, comprising:

This album proves that at almost 70 years of age, Jeff Lynne looks and sounds as though he was on stage with the band in their hey day in the late 1970s. 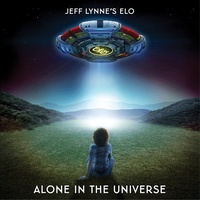