Mirage was intended to restore Fleetwood Mac to the top of the charts (Tusk had peaked at No. 4).  It succeeded, but over the years has taken a backseat in critical appraisal to the Fleetwood Mac, Rumours and Tusk albums.  Mirage however remains an overlooked, sparkling gem of a record ripe for rediscovery.

Lyrically and melodically, the group looked back to channel Fleetwood Mac and Rumours while nodding to the new decade. The clean, glossy production emphasized the back-to-basics approach of this bright, largely uptempo album.

Christine McVie, always musically conversant in matters of the heart, contributed four songs including the effervescent, shimmering opener "Love In Store" and dreamy "Only Over You", dedicated "with inspiration to Dennis Wilson," McVie's then-flame.  McVie and Robbie Patton penned the album's leadoff hit single, "Hold Me", another clear-eyed look at love on which she shares lead vocals with Buckingham.

Lindsey didn't quite mask his ambivalence toward the creation of Mirage, but gave his all, deploying his seemingly effortless gift at pop-rock songcraft on his five tracks, including the driving "Book Of Love", the steely, electronically-infused ode to the "Empire State", and the textured "Eyes Of The World" which manages to be both pretty and gritty.  Most atypical is his comparatively sweet and simple fifties rock-and-roll throwback "Oh, Diane", which has a bit of the feel of The Mystics' "Hushabye".

There's a lilting country twang to the guitars on Stevie Nicks' first of three songs on Mirage, the reflective, accepting "That's Alright".  She also looks back - and forward - on the rocking "Straight Back", which like Buckingham's "Can't Go Back", seems to address Nicks' return to the band for Mirage.  Nicks' semi-autobiographical "Gypsy" is the standout track and second most successful single on Mirage, a nostalgic journey with the vividly unforgettable imagery that's long been Nicks' stock in trade as a songwriter.

As on their best work, Fleetwood Mac is one unit here, with every one of the five band members adding to the tight arrangement.

Perhaps Mirage didn't begin with the same artistic inspiration as Rumours or Tusk, but it remains a potent work by a band still at the peak of its powers.  This set is no mere Mirage; it's a deep-dig into the vaults that's come up with a pop treasure chest.

This LP record is a 2017 reissue on 180 gram with a printed inner sleeve and remastered audio, pressed in Europe. 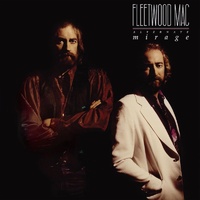