In The Fog is the fourth EP by Australian singer-songwriter Bec Sandridge, released in March 2017 via Farmer & The Owl and Inertia.

Bec Sandridge has a unique striking voice that takes “The Captain” back to the 1970s and 1980s new wave pop world (with a dash of disco), and includes a great cover version of Cyndi Lauper’s hit song “I Drove All Night”. On this song she strips back the arrangement within a slower tempo allowing her voice to shine through. All the other tracks are self-penned and are really strong and catchy. She sounds self confident in her songwriting and singing.

The EP opens with the foot tapping “In The Fog, In The Flame” which is really catchy, driven by a Cars like beat. The video clip for “You’re a F***ing Joke” is like a throwback to the Robert Palmer “Simply Irresistible” video clip, showcasing a glam role reversal for the lead female singer. The song itself is a standout, seemingly meshing an eastern influenced guitar riff with 1980s disco pop.

The five songs all work really well together and close out the EP with “I Keep Running Back“ closing out the album that starts with just voice and guitar and slowly builds and builds towards the end, again showcasing the beauty of her voice.

Don’t miss out on this very special EP, and we can’t wait for the release of her debut album.

This limited EP is on 12” black vinyl at 33 ⅓ RPM, pressed in Australia. 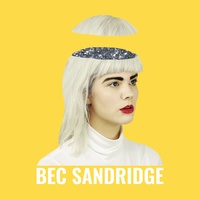