Black Sabbath has since the release of this album been credited with significantly influencing the development of heavy metal music.

The group's debut album was recorded in a single day on 16 October 1969 in a period of about 12 hours with very few overdubs.  It gives the album a spontaneous and fresh feel without being "overproduced".

Black Sabbath's music and lyrics were quite dark for the time.  The opening track is based almost entirely on a tritone interval played at slow tempo on the electric guitar.  The song's lyrics concern a "figure in black" which bassist Geezer Butler claims to have seen after waking up from a nightmare.

Similarly, the lyrics of the song "N.I.B." are written from the point of view of Lucifer, who falls in love with a human woman and "becomes a better person" according to lyricist Butler.

The lyrics of two other songs on the album were written about stories with mythological themes. "Behind the Wall of Sleep" is a reference to the H. P. Lovecraft short story Beyond the Wall of Sleep. "The Wizard" was inspired by the character of Gandalf from The Hobbit and The Lord of the Rings and includes harmonica performed by Osbourne.

The band also recorded a cover of "Evil Woman", a song that had been an American hit for the band Crow.

The Black Sabbath album cover features a depiction of Mapledurham Watermill, situated on the River Thames in Oxfordshire, England. Standing in front of the watermill is a figure dressed in black.

The inner gatefold sleeve of the original release was designed by Keith McMillan (credited as Marcus Keef) and featured an inverted cross with a poem written inside of it.

Black Sabbath was recorded for Fontana Records, but prior to release the record company elected to switch the band to another of their labels, Vertigo Records, which housed the company's more progressive acts.

Following its United States release in June 1970 by Warner Bros. Records, the album reached number 23 on the Billboard 200, where it remained for more than a year and sold one million copies.

This LP Record is pressed on 180 Gram Heavyweight Vinyl housed in a Gatefold Sleeve replicating the original artwork together with a CD copy of the album, pressed in Europe. 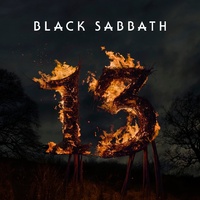