A Song For You is the fourth studio album by American pop duo Carpenters, originally released in June 1972 via A&M Records.

A Song For You was originally conceived as a concept album with the title track opening up the album and then closing it with a special little song at the end of Side A to take the listener into an “Intermission”, before changing to Side B.

This is one of the Carpenters strongest albums, seamlessly mixing cover songs with originals written by Richard Carpenter and his lyricist co-writer John Bettis.

The title track “A Song For You” is a cover of the Leon Russel song and the Carpenters make this version their own. The sax solo is wonderful and adds a different dimension than Russel’s original recording and arrangement. As a teenager, “The Captain” fell in love with this album and it was many years later that this writer discovered that the song had been written by Leon Russell.

The other stand out track for “The Captain” is the original song “Goodbye To Love” with the brilliant fuzz guitar solo by Tony Peluso. Many music fans in America considered that the band had sold out their “family friendly” image by moving into a harder rock territory with this recording. In fact this was the song that probably kicked off the AOR power ballad genre of music. To this day, the song is very powerful with it’s chord structure, melody, layered harmonies and “that” amazing guitar solo.

The song “Bless The Beasts And Children” had become a hit for the band well before the album’s release. It was used in the film of the same name in 1971, and subsequently nominated for an Academy Award.

The song “Hurting Each Other” became a successful hit single, followed by a cover of a Carole King song “It’s Going To Take Some Time”. The biggest sleeper hit on the album was the second track on the album “Top Of The World”. The band did not think this song would be successful as a single, however it was released in Japan and was covered by a US Country artist Lynne Anderson (her version peaking at #2 on the US Country Charts), that spurred it’s release in September 1973, more than a year after the album’s release.

The final single from the album “I Won’t Last A Day Without You” was released in March 1974.

There are a couple of other fun songs on the album including the Carpenter instrumental composition “Flat Baroque” and his lead vocal on the Randy Newman cover “Piano Picker”, which sounds as though it was written just for Richard.

Of course the album features the angelic voice of Karen Carpenter, and even after 40+ years, this album sounds as fresh and beautiful as it did when it was first released in 1972.

This LP record is a 2017 reissue on 180 gram heavyweight vinyl featuring remastered audio with replicated original US album artwork with printed inner sleeve and envelope cover, pressed in the US. 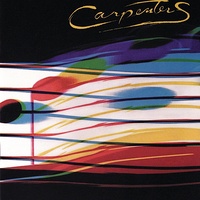