The follow-up to his successful debut album Doo-Wops & Hooligans (2010) presented a wide range of musical styles from disco to reggae rock, to R&B and soul. Mars collaborated with a number of musicians and producers to develop and record the songs on the album, including Mark Ronson, Jeff Bhasker and Paul Epworth in addition to his production team The Smeezingtons consisting of Bruno Mars, Philip Lawrence and Ari Levine.

The album revolves around the theme of relationships and Mars had more creative and input to the production of the album, than on his first. The album contains some very up-tempo and dancable numbers, and a couple of ballads, in particular the piano based song “When I Was Your Man”, which is reminiscent of a Paul McCartney, Elton John or Stevie Wonder song. The disco themed song “Treasure” was inspired by British duo Wham! and references their hit song “Baby I’m Yours”. The catchy “Money Make Her Smile” was written after Mars made a visit to a strip club.

Five singles were released from the album, two of which peaked at #1 on the US Billboard Hot 100 Singles charts, which were “Locked Out Of Heaven” and “When I Was Your Man”. The album was promoted with his Moonshine Jungle Tour.

The album peaked at #1 on the US Billboard 200 Albums charts and was also a smash hit globally peaking at #1 in Australia, Canada, UK and Switzerland.

Check out the singles:  “Locked Out Of Heaven”; “When I Was Your Man”; “Treasure”; “Young Girls” and “Gorilla”.

This LP record is on 140 gram black vinyl with a printed insert, pressed in Europe. 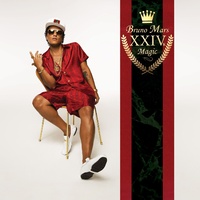