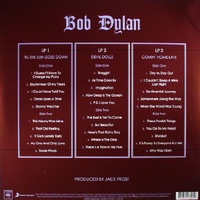 It's possible to read the title of Triplicate in two ways. First, the collection is the third installment in Dylan's exploration of the Great American Songbook, following quickly on the heels of 2015's Shadows In The Night and 2016's Fallen Angels. Secondly, Triplicate is indeed a triple-album, or perhaps more accurately, a set of three interlinked albums all running 32 minutes apiece. Each of the three are given titles - the first is dubbed 'Til The Sun Goes Down, the second Devil Dolls, with Comin' Home Late rounding out the collection - and they're presented in a manner not dissimilar to an old-fashioned album of 78 rpms, a nod to the dawn of popular recorded music.

By now, Dylan's approach to this material is familiar, he takes his touring band into the legendary Capitol Studios in Hollywood to record arrangements that feel lean yet full, rooted in pre-war pop but played for a barroom audience, but it is by no means exhausted.

Dylan is captivated by this music, revelling in the lyrics, restoring intros often left off of modern interpretations, bending his style to fit the songs instead of vice-versa. Like Fallen Angels before it, Triplicate is palpably lighter than Shadows In The Night, and that's not just because there are livelier tempos here ("Day In, Day Out" positively glides along on its swift speed and horns).

Much of this breeziness derives from Dylan's performance. Cherishing the turns of phrase as much as the intent of the song, he sings with a sly sensitivity that's alluring; when he elongates a phrase or has his voice crack, he reveals more about the song than any retro-swinger with showboating chops.

This comparison stands on Triplicate more than its predecessors because it's filled with songs that often appear on modern collections of standards: "Stormy Weather", "As Time Goes By", "The Best Is Yet To Come", "Day In, Day Out", "Sentimental Journey", “These Foolish Things", and "Stardust". Dylan treats these common classics with as much care as he does "There's A Flaw In My Flue," a Jimmy Van Heusen/Johnny Burke obscurity that appeared on Frank Sinatra's 1957 Close To You. Its appearance suggests how Triplicate, along with its cousins, is an ongoing exploration of Sinatra's body of work, but if Dylan learned anything from Sinatra, it's how to drill to the core of the song.

Dylan does just that on Triplicate, finding the heart beating within some old warhorses and placing them within several great American musical traditions, and that's why this cements his place as one of the most distinctive interpreters of the Great American Songbook.

Check out the tracks: “I Could Have Told You”; "Stardust"; and “My One And Only Love”.

This triple album 3LP record set is on 180 gram heavyweight vinyl with a printed insert and digital download code, pressed in the US.