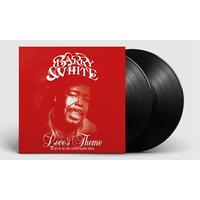 Barry White was a three-time Grammy Award–winner known for his distinctive bass-baritone voice and romantic image, White's greatest success came in the 1970s as a solo singer and with The Love Unlimited Orchestra, crafting many enduring soul, funk, and disco songs such as his two biggest hits, "You're the First, the Last, My Everything" and "Can't Get Enough of Your Love, Babe".

During the course of his career in the music business, White achieved 106 gold albums worldwide, 41 of which also attained platinum status. White had 20 gold and 10 platinum singles, with worldwide record sales in excess of 100 million, White is one of the world's best-selling artists of all time. His influences included the Rev. James Cleveland, Ray Charles, Aretha Franklin, and Elvis Presley plus Motown artists The Supremes, the Four Tops, and Marvin Gaye.

Featuring Barry White's most iconic tracks, Love's Theme: The Best Of The 20th Century Singles includes the legendary hits: “Love's Theme by Love Unlimited Orchestra”; “Can't Get Enough Of Your Love, Babe”; “You're The First…” and many more.

Check out the tracks:  “Love’s Theme”; “You're The First, The Last, My Everything”; “Can't Get Enough Of Your Love, Babe”; “Let The Music Play”; and “Never, Never Gonna Give Ya Up”.

This double album 2LP record set is a “Back To Black” release on 180 gram heavyweight vinyl with printed inner sleeves, remastered audio and digital download code, pressed in Europe.