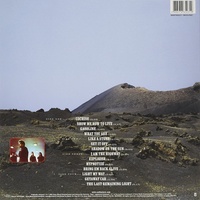 Few rock supergroup line-ups had fans slavering in anticipation as much as Audioslave, the band which emerged from the ashes of Rage Against The Machine's acrimonious split with singer Zak La Rocha.

The notion of Soundgarden's Chris Cornell stepping into La Rochas Fair Trade moccasins may have raised a few eyebrows, but it put a smile on the faces of those who had been itching to hear Cornell put his redoubtable talents to good use again.

All too often in the case of supergroups, the resulting whole is less than the sum of its parts. In this respect, Audioslave defied convention, producing an album that sounded both classic and fresh, and more importantly, like a going concern rather than an exercise in necrophilia.

As one would expect from anything touched by the mighty hand of producer Rick Rubin, it's a tattooed-to-the-bone rock record. Sure, there are dim echoes of RATM and Soungarden, but if comparisons are to be made with anyone, it's 70s rock greats that spring to mind.

Opening track "Cochise" thrusts and grooves its way down a road well-trodden by the likes of Led Zeppelin and Black Sabbath. This sets the tone for the rest of the album; heavy, powerful riffage over rumbling bass lines and thumping colossal drums. Subsequent tracks such as "Gasoline" and "Shadow On The Sun" continue to mine a similar vein, the latter climaxing spectacularly in a tempest of throbbing guitars and broken-glass vocals.

Guitarist Tom Morello is on scorching form, discharging killer riffs like a magazine of bullets, while Chris Cornell proves effortlessly that he is without question one of the finest rock singers ever, capable of both sexually-charged crooning and feral blasts of vocal rage.

Although the heaviness tails off a little by the time we get to "Getaway Car", this is a looser, freer record than anything RATM ever did. It's almost as if Tom, Timmy and Brad are just happy to rock out without having to worry about the righteousness of the lyrics. Cornell sticks to well-worn Jesus-Christ-Pose musings such as "Nail in my hand / From my Creator" ("Show Me How To Live").

This was an excellent debut.

This double LP housed in a gatefold sleeve with printed inner sleeves and remastered audio is pressed in Europe on 180 gram audiophile heavyweight vinyl.