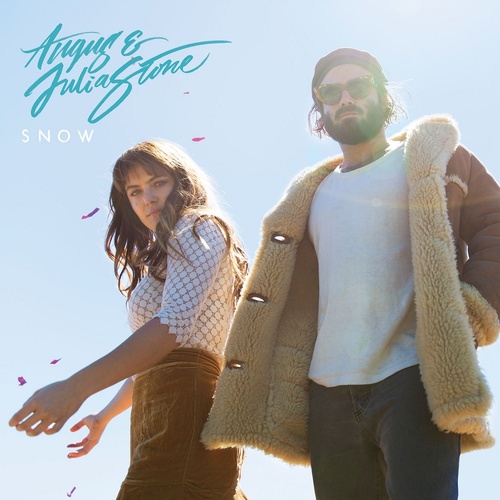 Snow is the fourth studio album by Australian singer-songwriter duo Angus & Julia Stone, released in September 2017 via EMI in Australia and Nettwerk in the US.

At the suggestion of producer Rick Rubin (who produced their self titled album in 2014), the siblings started writing songs together in the same room for this album.

They recorded the album at Angus’ cottage studio in the Byron Bay hinterland, and produced the album themselves. "It was quite magical because Angus and I have never spent that much time together, just the two of us," says Julia. "There's always at least an engineer or tour manager but the last phase of writing and recording was just eight weeks of him and me and the quiet of the land. It was a beautiful time."

As songwriters and performers, Angus explains, "We’ve seen a lot of the same things but they come out of minds and hearts in different ways. We have united memories but different perceptions which makes creating together really interesting”

Julia adds, “We can be talking about the same thing, but how we talk about it, how we feel about it is different. I think that what makes it exciting for us to write together. There’s a line that ties us.  Then there’s the many different ways to talk about that line.”

The first notes of “Snow” are instantly transporting. The guitar is a scratchy, wooden memory laid over a moment of silence. The gently driving organ beat emerges and takes you with it, beginning the next enchanting journey with the brother-sister duo, "Running from the start, here we are again," Julia sings. "Running from the start, here we go again," comes her brother's reply.

“Chateau” is a song of pure contentment in time and place. “Nothing Else To Do” is a stunning acoustic breeze - "There's nothing else to do here but fall into your arms," Angus and Julia sing in effortless harmony.

“Cellar Door” borrows its title from the film Donnie Darko, its subject drawn from the intensely personal experience of the siblings' grandfather's funeral. On “My House Your House”, they find a call-and-response groove that paints a shared place viewed from different angles.

"There's a lot of this on there, where Angus would find the story in the verse and I would find it in the chorus and we find a way through because of each other," Julia says. "We have very different styles of writing but they seem to work together. In a way, it’s the differences that make it sound the way it does.”

"I never could have imagined that Angus and I would still be working together 10 years later — i feel pretty lucky we get to make music together. We've been through so much, so many shared experiences and memories."

"It’s exciting to share new music with people for sure... but to be honest, it's not why I got into writing music," says Angus. "For me it's always just been an expression… but it’s a great feeling if people are digging it”

The album incorporates new instrumentation for the duo with the use of a drum machine and more guitar palates throughout the album. It also incorporates the use of a $150 organ the pair bought from an advertisement on the opening track, "Snow".

The album peaked at #2 on the Australian, #13 on the New Zealand and #98 on the UK Albums charts.