Check out the tracks:  “Department of Youth”; “Only Women Bleed (Live)”; “Welcome To My Nightmare”; “Devil’s Food”; “The Black Widow” and “Cold Ethyl”.

This limited edition LP record is a 2018 reissue on purple coloured vinyl with a printed inner sleeve, pressed in the EU. 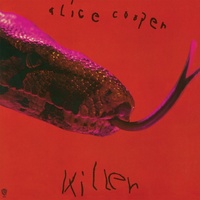