AC/DC‘s storied career hit on a rough patch with their opinion-dividing Flick Of The Switch.

When they first began to lay down plans for recording their ninth studio album, their career was at its absolute commercial peak, flying high on the world-beating success of 1980’s flawless Back In Black and its worthy successor, For Those About To Rock. Both albums had kept the band touring and/or working for nearly two years straight, so once they finally found the time to reflect on their next move, they decided it was time to go back to basics.

Fatefully, the group decided to produce Flick Of The Switch themselves in a concerted effort to strip their songs of any lingering studio polish. To that end, AC/DC spent less than a month recording, and later drove their point home with the help of a spartan, startlingly white cover art, featuring nothing but a pencil sketch of Angus Young preparing to flick that giant electric switch.

Not benefiting from a producer’s helpful outside perspective also wound up stripping many of the songs of their top-shelf ideas, too, and it’s telling that none of Flick Of The Switch‘s tunes – save for the electrifying “Guns For Hire” and the title track – have enjoyed much of an afterlife beyond the album’s supporting tour. Yes, brothers Angus and Malcolm Young still churned out a reliable batch of excellent riffs and solos on “This House Is On Fire” and “Landslide”, but nothing on par with recent triumphs.

Ultimately in their attempt to strip out the studio polish and deliver a raw album representative of their roots, ironically many of the songs seemed undercooked without the external influence of a producer. The final verdict on Flick Of The Switch was frankly handed down by AC/DC fans, who barely saw fit to nudge the album towards platinum sales over many slow-selling years to come, thus falling well short of the multi-platinum thresholds established by its predecessors.

Check out the tracks: “Guns For Hire”; “Flick Of The Switch” and “Nervous Shakedown”.

This remastered LP on 180 gram heavyweight vinyl with embossed cover and printed inner sleeve is pressed in Europe by Columbia Records in May 2009.

For Flick Of The Switch AC/DC were: 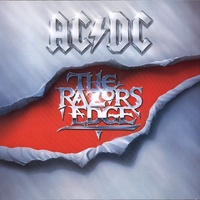 The Streets - The Hardest Way To Make An Easy Livi