Dutch Tilders And The Blues Club - The Blues Is My Life

The Blues Is My Life is a live album by Australian blues musician Dutch Tilders and The Blues Club, originally released in April 1990 via Blues Club Records.

In 1986, Tilders formed Dutch Tilders & The Blues Club with Martin Cooper on lead guitar; Winston Galea on drums and Barry Hills on bass guitar. In 1990, Cooper left the Blues Club and was replaced by Geoff Achison on lead guitar. In April 1990 they released this album, The Blues Is My Life, when it was noted Tilders' was able to display his "rough-edged voice and guitar, traditional blues from the darker side of life." -The Canberra Times, 1990

Recordings were made at Studio 52 in Collingwood in November 1989 and April 1990, and an LP was released soon afterwards. On the album you can hear Dutch Tilders (vocals, guitar); Geoff Achison (guitar); Kenny Sutherland (harmonica); Terry Noone (tenor saxophone); Martin Corcoran (baritone saxophone); Ron Sedgman (keyboards) and Winston Galea on drums.

Check out a couple of tracks. Stop & Fix It and Bad Books.

This 1990 album is released on CD in 1999, housed in a jewel case with a printed insert, pressed in Australia via Blues Club Records. 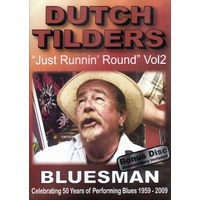