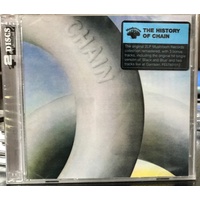 Chain - The History Of Chain

The History Of Chain is the first compilation album by Australian blues band Chain, originally released in October 1974 via Mushroom Records.

Chain are an Australian blues band formed in 1968 with Phil Manning (guitars, vocals) and others. Chain were named after the classic soul track "Chain of Fools" by the band's early vocalist Wendy Saddington.

The band’s debut single released in 1969, was Show Me Home / Mr. Time, and the piano/organ interplay was reminiscent of The Band and a very early example of progressive rock in Australia. The band's debut album, the classic Live Chain, was recorded live to two-track at Caesar's Palace discotheque in Sydney in July 1970 and released in October 1970.

In late 1970 Matt Taylor was invited to join Chain and the band convened in Brisbane for their first rehearsal. This line-up is regarded as the classic Chain line-up of Phil Manning (guitars, vocals), Matt Taylor (harmonica, vocals), Barry 'Big Goose' Sullivan (bass) and Barry 'Little Goose' Harvey (drums). Out of that first rehearsal the song “Black and Blue” was born, and Michael Gudinski was appointed their manager, and they soon found a regular gig playing on a Saturday at the Village Green Hotel in Melbourne. Around this time the drinking age in Victoria was lowered from 21 to 18 and the age of pub rock was born.

"Black and Blue" was released by this line-up as a single in March 1971 on Festival's Infinity label, which peaked at #12 on the national singles charts in May. In Melbourne on the 3XY Rock Music Charts, “Black and Blue” replaced Spectrum’s “I’ll Be Gone” at the #1 spot and stayed there for 19 weeks before being replaced by Daddy Cool’s “Eagle Rock”. How is that for a trio of classic Aussie rock songs!

The second single, "Judgement" released in July 1971 reached the top 40 nationally and was followed in September by their debut studio album Toward the Blues, which reached #6 on the Australian national albums charts and continued to sell steadily over the next 20 years, eventually reaching Gold status. This classic Chain line-up only lasted about 12 months and broke up in July 1971 before their debut album was released!

Manning, Harvey and Sullivan left Chain and Matt Taylor soldiered on briefly with other musicians until the end of 1971 before launching his very successful solo career in 1973 with the release of his debut solo album Straight As A Die.

Chain reformed in November 1971 with Harvey, Manning, Mason, Morgan and Sullivan to record, Live Again, which was not released until October 1972.

A three-piece line-up of Morgan, Pryor and Sullivan performed at the inaugural 1972 Sunbury Pop Festival, held over the Australia Day long weekend in January 1972.

In February 1973, Manning changed the name of his then group Mighty Mouse to Chain with: Mal Capewell on saxophone, flute (ex-Company Caine), Ian Clyne on organ (ex-The Loved Ones), Sullivan on bass guitar and Harvey on drums. Chain's band manager, Michael Gudinski had signed the band to his newly formed label, Mushroom Records which released two non-charting singles and then an album, Two of a Kind in December 1973 with contributions from James Madison on guitar and George Beauford on vocals and harmonica. Both were members of touring mate Muddy Waters' band.

Forming in February 1974, the next Chain line-up were Manning, Sullivan and Mal Logan on keyboards (ex-Healing Force, Carson) and Tony Lunt on drums (ex-Carson); they broke up in July and Mushroom released the compilation album, History of Chain, in October 1974, closing a chapter on Chain until they reformed to play at the Mushroom Records 10th Anniversary Concert in January 1982.

History of Chain was originally released as a double vinyl LP album set and was reissued on CD in 2013 with 3 bonus tracks.

Check out a couple of tracks featured on the album:  Show Me Home; Gertrude Street Blues; Dust My Blues; Judgement; Two of a Kind; Black and Blue; and Feelings.

This double album is reissued (July 2013) on 2 CDs featuring remastered audio with 3 bonus tracks housed in a jewel case with booklet, pressed in Australia.